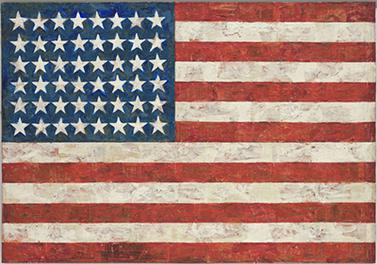 Flag, for instance, is primarily a visual object,
divorced from its symbolic connotations
and reduced to something in-itself.
—Wikipedia,
painter Jasper John

Expressing yourself with the American flag IS FREEDOM OF SPEECH…one of the pillars that we hold so dear of this country and upon which it is founded. It erodes the foundation of the nation, in fact, and erodes the freedoms which make it great to consider so heinous or try to make illegal to exercise expression with a piece of cloth. What if a creation or change made to a flag is art? What if “defiling” it is done to make a *statement* about the hypocrisy and corruption so abundant in the nation’s government? One example of such hypocrisy and corruption would be the flag of slavery flying 45 years after Civil Rights. Even if it offends your sense of nationality or patriotism, there are SO many *much* worse examples of disrespect to the nation and its principles including freedom and justice–which two of the U.S. flag’s colors are popularly claimed to stand for–such as (see previous example, and) all the ways in which censorship is used to perpetuate one usually-already dominant and hegemonically oppressive group’s beliefs at the expense of others, marginalizing them and exploiting them and their minority position, taking advantage of their oppressed position. An example would be the ANTI-CONSTITUTIONAL swearing on (in courts) and swearing in (of political executive officials) on one dominant religion’s text, spitting in the face of SEPARATION OF CHURCH AND STATE. Freedom of religion includes freedom FROM religion.

Please review the Bill of Rights, “Amendment I: Congress shall make no law respecting an establishment of religion….”