As posted to the United Front-Civil Rights Organization: 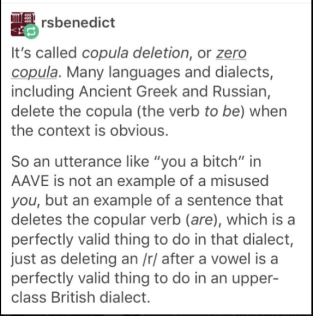 When white people or teenagers in general use it, they are still using AAVE (African American Vernacular English). It’s not only used by African Americans anymore, since our culture is mixed, and (especially suburban teenage male) whites were sold Black culture in pop culture (namely hip hop in the late 80s), and people who are not Black/African American feel a right to co-opt it. Also, I think since AAVE is an American dialect, Americans in general (of all colors and creeds) might use it sometimes, in certain settings–whether an authentic way they learned to talk or not, a later adopted dialect. I agree it can make people “sound ‘uneducated,'” but that’s because of race (and class) hegemony pushing whiteness=rightness in education.

The responses to the original anonymous Tumblr post point out that there is a grammar system–I think it’s also called a pattern of syntax–at play in “You [delete to-be conjugation] + article + noun object-of-sentence” or “You [delete to-be conjugation] + adjective.” And that, in fact, it *matches* the grammatical system (or pattern of syntax?) of Standard American English (SAE), or “proper” English.

Of course in actual life, in reality, at a job interview or in a professional situation, yeah, it sounds uneducated or is considered unprofessional–but that’s because the Anglo dialect (SAE) is the one given clout…by the clout-givers, generally the traditionally dominant culture, aka the culture of the group that violently dominated historically and continues to by all that historical privilege and advantage in the professional realms. In this country and culture’s case, often only when the original inventors and speakers of AAVE hold power in those realms, have staked a claim to clout, do current African American, and Brown People of Color speakers of AAVE pass the gate-keeping official and unofficial tests, prescribed and informal interviews and networking interactions, and algorithms of professions and professional climbing.  It’s also why AAVE is termed a “vernacular,” language spoken in daily life, colloquially.

African American Vernacular dialect functions with the same if not more complexity as Standard American English.**

See, even though AAVE (and other dialects) actually have grammar or syntax patterns = rules…they’re devalued simply because they’re not the norm (SAE) that white Americans developed for English, by natural random language evolution and on purpose, especially for education and for professional speaking.

Ask yourself: How does it sound when someone speaks with a British cockney accent? Educated or uneducated?

If you are a person who’s not African American and/or did not learn to speak AAVE growing up, do you ever say phrases like, “Where you going?” or even “Where ya going?” These also omit the “are,” the to-be conjugation (though I don’t know if it is happening in the same way linguistically!).
And would you say this, would you speak like this in a job interview or in a professional setting? More importantly, especially if you are a white person in a position of hiring or recommending power, can you accept copula deletion just as you would copula contraction? ^^

**African American vernacular dialect functions with the same if not more complexity as Standard American English:

Because English is largely lacking in the subjunctive and other general or what-if verb tenses (cases? Linguists please help me out here!), or doesn’t have a different-sounding word or verb conjugation for the subjunctive or a certain verb tense, Africans who were brought here retained these tenses from their African languages. For instance, saying “She be…” + adjective or + -ing verb, using the infinitive auxiliary, or helping, verb is actually from Yoruba tribe language structure! And from some other African languages, if I remember right what I’ve learned. And it’s a structure **more complex** than that of English! It makes for an additional verb tense. English is missing this kind of verb tense and murky with others: for instance, describing a chronological spot on a timeline that’s distinctly in the present but also a lasting, though undefined, length or range–so when Africans from many different tribes were learning English, suddenly forcibly put into English-speaking American environments as slaves, people or a single person from one tribe mixed up with people from all different tribes who spoke different languages, and communicating, especially learning some English was a matter of life and death, these verb tenses / sentence structures stuck around! The African language infusions clarify the English or add to it.
(Linguists, please correct, if the infinitive in “pronoun + infinitive” structure is not an infinitive auxiliary!)

^^…What if in your job, and maybe in your life in all aspects, you never have to use “professional” speak…? When African Americans and other People of Color (and poor whites and light-skinned people, namely the Irish, before the category of “white” became so omnipresent as the norm) were kept out of “professional” jobs and business and life, there was no need to learn or adapt to “professional” English of the dominant educated class/race/group. In that sense, of course it is just as “professional” to use whatever dialect you speak–or even a different language, a “creole,” or what’s called a “pidgin” (mixture of two languages into a business/commerce dialect).   If you *were* a business person of the year 18-something-or-other or the early 1900s, say, a butcher and maybe even owner of a butcher shop, and you, say, talk to a German to get lamb and to a Jewish Rabbi who speaks Hebrew to get Kosher meat and to first-generation Italian immigrants and Irish immigrants, etc., would you speak perfect King’s English or Standard American English of the time ? If you were an African American who until segregation mostly interacted for business only with other African American people, except maybe sometimes with other usually ghetto-ized People of Color and/or a few poor white people, often immigrant light-skinned people…wouldn’t the dialect would serve you just fine, including in your profession?